Islam: An Invitation to Think!

“Say: O people of the Scripture: Come to an agreement between us and you: that we shall worship none but Allah (God), and that we shall ascribe no partners to unto Him, and that none of us shall take lords besides Allah (God). And if they turn away, then say: Bear witness that we are they who have surrendered (unto Him).”
The Noble Qur'an, 3:64 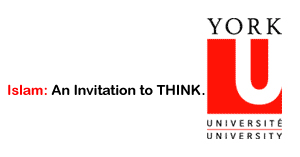 This open lecture given at York University in Toronto (2005) was an invitation for Non-Muslims to enter a dialogue about Islam. An opportunity not only learn about the reality of Islam but an opportunity to enter a dialogue towards agreement that the Supreme Creator should be singled out in Worship. Unlike a prototypical lecture, this event was more of a discourse between the speaker and the audience creating a unique experience for all involved.